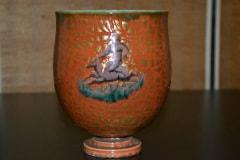 Jean Mayodon was trained as a painter, but became a ceramist with a painter's mind. He produced figurative decorated pottery after the antique tradition characterized by the practice of stanniferous earthenware with "golden fire." He fitted his own ovens and learned chemistry in order to achieve oxide colored pieces interspersed with a gold pattern giving it a precious aspect. This piece exhibits this rich orange and gold ground characteristic of Mayodon's best work. Some of his work exhibited mythological creatures and nudes. He was appointed Conseiller Artistique at Sevres in 1934 and was its Artistic Director from 1941-1942.

Sold out
Add to Cart